Being part of the Official Fansite Programme comes with many advantages. As in previous years, Crystal Dynamics provided me with a free review code for Shadow of the Tomb Raider for Xbox One. At this point I would like to thank them again!

A few words to start with:

This review is spoiler free! I will also show only a few in-game screenshots to avoid showing too much in advance. One thing can be said for sure:

Shadow of the Tomb Raider is not just the grand and grandiose finale of Lara’s origin story, but also (finally) a true Tomb Raider adventure again we all have been waiting for!

I’ll start with a few general words and game features and how I experienced them personally. After that, I will conclude this review with my personal impressions, further screenshots and opinion.

Note: Own captured screenshots are labeled with a Tomb Raider Web watermark. All other screenshots or captures, without any watermark, are taken from the official Tomb Raider channels. If you would like to use some of the watermarked ones, I’ll gladly provide you with a clean version as long as you link back to the original source.

As many of you already know, in Shadow of the Tomb Raider our heroine Lara Croft will become who she is meant to be: the Tomb Raider we all know. Driven like never before and struggling to not become the enemy she fights, Lara must stop the Maya Apocalypse she unintentionally triggered herself and save humanity from Trinity.

Play it your way

Shadow of the Tomb Raider comes with the feature to customise your experience regarding combat, exploration and puzzle difficulty.

And you can not only choose the traditional easy, normal or hard mode, but you can also individually choose a difficulty level for combat, puzzle and exploration independently of one another. So you can play the game the way you like to, balancing your strengths and weaknesses. Personally, I think this is one of the best features Shadow of the Tomb Raider has to offer. My weakness, for example, is combat. But I am good at exploring and puzzling. Accordingly, I adjusted my difficulty level and had much more fun playing the game. By the way: even during the game the difficulty levels can always be adjusted (which comes in handy when you’re super stuck, for example). Just awesome!

Just two days ago, the Photographer Mode for Shadow of the Tomb Raider was announced via the official TR social channels. This mode lets you capture the beautiful environments and/or Lara herself. But this is not the ordinary screenshot we’re speaking about here – the Photographer Mode is so much more. 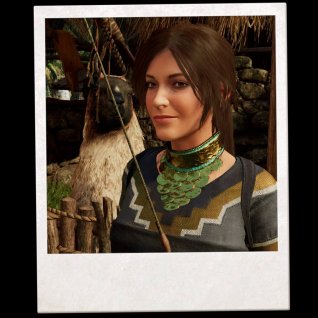 When starting the mode, you can add frames, filters, borders, letterboxing, polaroid effects and even change Lara’s facial expression to happy, sad, sly, surprised, angry, and more! The best thing about this is, that you can completely adjust the camera and the angel (you can completely move it around the object you’d like to take a shot of) using Photographer Mode. You can’t imagine how many photos I took of Lara cuddling a llama in Paititi (or just of the llama). It is just absolutely incredible, how many possibilities the Photographer Mode offers. Get ready to become the Perfect-Shot Raider!

Eidos Montréal has created the biggest city hubs that were ever created for a Tomb Raider game and one of them is the hidden city of Paititi.

Paititi is home to a civilisation untouched by modern culture. You will be able to explore this bustling city and also find challenge tombs, side missions, and so much more. A new feature even allows you to hear the people of Paititi speak in their native language. Furthermore, Lara will find a huge market place in the city where she can get her hands on crafting material, weapons and outfits. There’s so much more to say about Paititi, but I do not want to spoil anything for you. What I can say though is:

You can absolutely look forward to Paititi and everything it has to offer. I really love this huge hub with all its people – which are, by the way, far from being flat story characters at all! Eidos did the most amazing job to really bring the inhabitants of Paititi to life and give them their own, unique personality. And I don’t have to mention all the llamas again, have I?! Paititi is THE place to be for any llama that can be found in Shadow of the Tomb Raider. Yes, I’m obsessed. They’re just too cute!

Those of you lucky enough to have already played the demo know that in Shadow of the Tomb Raider Underwater Exploration will finally play a big part again. Eidos Montréal heard the fans and brought back huge, deep and deadly underwater worlds.

Underwater Exploration plays a big role in Shadow of the Tomb Raider and brings back something familiar and beloved especially for the classic Tomb Raider fans. And believe me when I tell you that you’ll find yourself holding your own breath when Lara dives down a seemingly endless underwater passage and then has to squeeze through very narrow crevices. Take a deep breath!

As previously mentioned, Eidos heard the fans and so more Challenge Tombs will be available in Shadow of the Tomb Raider as in any other previous Tomb Raider game. But those tombs are deadlier than ever before and each one more terrifying than the last. Lara Croft’s skills will be put to the test through increasingly brutal and intricate puzzles. 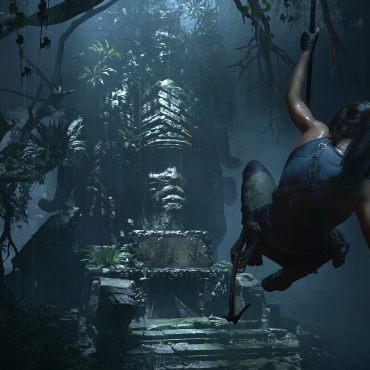 Having fully played the game already, I totally agree with that. However, it must also be said that although this sounds quite frightening, depending on the level of difficulty set, it is definitely feasible. Nevertheless, the Challenge Tombs are and remain really tough and want to be mastered by a real Tomb Raider.

As you may know already, Lara pursues Trinity into the wild jungles of South America. And those are pretty deadly. Predators like jaguars and eels will force Lara to always take a look over her shoulder. But it is not only predators that will complicate things for Lara. Trinity soldiers are waiting for her around every corner.

Methods like covering herself in mud, climbing trees and blending in with thick vines will help Lara to get out of the soldiers’ vision. I have never in my life had more fun with stealth than in Shadow of the Tomb Raider. I actually have always hated it. But with all those new possibilities, Lara really becomes one with the jungle and can sneak up on Trinity unnoticed. You often have to wait for the right moment to attack an enemy so that you do not drag all the attention on you. It really was a lot of fun!

Shadow of the Tomb Raider is everything, if not more, I had hoped for. The game is a great adventure in the style of a real Tomb Raider game. Lara Croft becomes the Tomb Raider we all know and appreciate. You accompany her on a dangerous journey and watch her grow step by step as she evolves. You will also learn a bit more about her past. But that’s not all. Shadow brings a lot of fun, great puzzles, deadly tombs, beautiful hubs and levels, lots of round characters, authenticity and goose bumps. 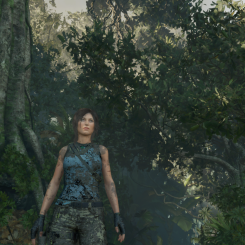 I’d like to address the classic Tomb Raider fans in particular, because you may sit in front of your screens, moved to tears, just like me (and that’s what we have been waiting for, haven’t we?). We have not been forgotten! The reboot series is really great, although I personally wasn’t impressed by Tomb Raider 2013 at first. I liked Rise of the Tomb Raider much better – but Shadow is unique.

It’s still hard for me to find clear words because the game has put me in all the emotional states a human being can possibly have. I can only recommend you to play the game if you are a fan of the Tomb Raider series – no matter if you are a classic or reboot fan or a fan of all Tomb Raider eras! Shadow has it all. That’s what makes this game so incredibly special.

I would like to especially thank Crystal Dynamics for the free review code I was provided with and Meagan Marie and Morrigan Johnen for being the most wonderful and supportive Community Managers we could have asked for. I would also like to thank Square Enix, especially Square Enix Germany and their wonderful Community Manager Barbara Winterfeldt. My biggest and warmest thanks goes to the amazing team at Eidos Montréal of whom I met a few outstanding personalities a couple of weeks ago at the Tomb Raider Community Dinner in Cologne. Daniel, Arne, Nick – your talent and passion really made its way into the game and I can’t thank you enough for delivering something so good and so special!

And last but not least: Thank you to everyone who read this review, supports the Tomb Raider franchise and its community and especially my official fansite. It really means everything that you appreciate my articles! I would also like to thank the cosplayers for creating such fantastic Shadow of the Tomb Raider outfits. From my own personal experience I can tell that making this outfit is really hard work!

And now have a look at the official Shadow of the Tomb Raider launch trailer, which was released only a few hours ago!

2 thoughts on “Shadow of the Tomb Raider: A Spoiler-Free Review”