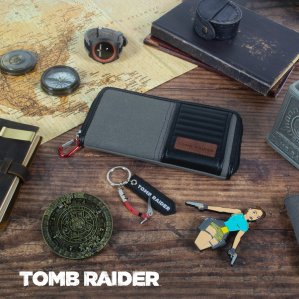 Not only the fans of the latest, rebooted Tomb Raider series will get their money’s worth with all the Shadow of the Tomb Raider inspired merchandise. Numskull Designs hasn’t forgotten about the classic fans, which is a very pleasant surprise, and created an incredibly beautiful classic Lara Croft pin badge and a set of four official PlayStation 1 coasters, which are exact replicas of the game box art for the first Tomb Raider coasters. Doesn’t this feel like 1996?!

The Shadow of the Tomb Raider inspired merchandise also looks absolutely fantastic. You can get a hoodie, a cap, a wallet, a super cute ice-axe keychain, a glass candle, some very fancy mugs and so much more!

Personally spoken, Numskull Designs has outdone themselves. The merchandise is of high quality and the design was created with a lot of passion and well thought out, especially regarding the fantastic details of every single piece. Adding some pretty cool retro classic Tomb Raider merchandise honours the veteran fans and gives them the chance to add some new collectibles to their collections which could be right from 1996!

The merchandise can be pre-ordered here from now on! The products will probably be shipped around mid September.

To learn more about Numskull Designs, to participate in giveaways and to stay up to date on their official video game, movie, TV & comic book merchandise & clothing, follow their official Twitter!