As we have stated a few days ago, Tomb Raider Web got listed as „Warner Bros. Social Influencer”. In connection with this, we have received an extraordinary gift from Warner Bros., promoting the upcoming Tomb Raider movie starring Oscar© winner Alicia Vikander. 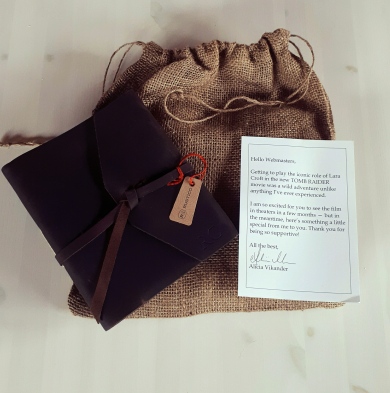 The gift we have received is an exact replica of Lord Richard Croft’s diary Lara can be seen with in the movie. It is made of high quality leather, handcrafted by RUSTICO and came packed in a hessian bag filled with straw (pretty much the Croft-style!) including a beautiful, signed message from Alicia Vikander herself.

And this is what Alicia wrote to us:

Getting to play the iconic role of Lara Croft in the new TOMB RAIDER movie was a wild adventure unlike anything I’ve ever experienced.

I am so excited for you to see the film in theaters in a few months – but in the meantime, here’s something a little special from me to you. Thank you for being so supportive!

We have taken and uploaded a few photos of this absolutely amazing gift for you, check them out by clicking through the gallery below! 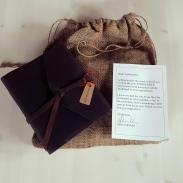 Thank you very much Warner Bros. and Alicia Vikander for this incredible gift, we appreciate this a lot!

Make sure to follow the official social channels of the upcoming Tomb Raider movie which hits cinemas on March 16.