Today we will focus on another incredible Tomb Raider fan project: Tomb Raider Legacy – a fan film based on and inspired by the Tomb Raider 2013 video game, starring Petra Pausch as Lara Croft and Nora Rüdiger as Sam Nishimura.

The film is unbelievably 50 minutes long and available on YouTube. Official fansite Tomb Raider Web had the exclusive chance to talk to both Petra and Nora about their film, the making-of, the visited locations, costumes, a sequel, and so much more. You can find the interview with exclusive footage below and don’t forget to check out the film on YouTube as linked on the bottom of this article! 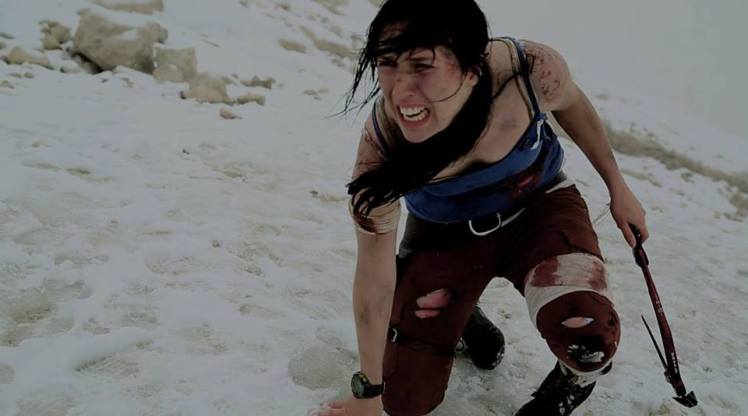 1) You have recently published your fantastic Tomb Raider fan film on YouTube. What inspired you most regarding making the film?

Everything started with our love for the Tomb Raider 2013 video game. The story of the new, young and vulnerable Lara Croft really spoke to us. We wanted to share our love for this game and give something back to the creators and fans of the game. As fans, seeing fan work (Fanart, Cosplay, Fan Films, Fanfiction etc.) from beloved franchises always makes both of us extremely happy and we wanted to make others happy, too.

2) Can you tell us a little about the story in your film?

Our film tells the story of the Tomb Raider 2013 video game. We tried to stay close to the original but also added our own ideas. So basically the film follows Lara Croft on her first adventure on the island of Yamatai trying to solve the mystery of queen Himiko and fighting her way through the groups of hostile Solarii in order to save her best friend Sam Nishimura. For more detail just watch our movie.

3) Let’s talk about the making-off. What settings did you visit? To what places did you go and how did you choose them?

We knew a lot of the cave-locations from childhood hikes. Others we looked up on the internet and scouted them. We often used the exciting surroundings near the caves for our outdoor shoots. Generally we’d go to those places and imagine the scenes in order to see if and how we could realize them there. Some were too small, or didn’t fit the atmosphere we wanted for our scenes. But others just instantly “clicked”.

The location for the movie’s finale, Himiko’s ritual, was filmed on the highest mountain of Germany, the “Zugspitze”.
We desperately needed snow but there was none in the whole country. So we started our road trip to the “Zugspitze”. We had to get up super early and it just rained the whole time on our way there. Even during our way up to the mountain via gondola it kept raining and we were super worried that there would be no snow at the summit. But luckily the rain turned into snow just moments before our arrival.
It was magical stepping outside of the gondola and being surrounded by an actual small snow storm (-7 Celsius + freezing wind).
So we got ready for filming and changed into our costumes in an inn and then searched for a location nearby, so we could always go back into the warmth of the inn in a relatively short amount of time.
We only filmed 45 minutes, then took a break to warm up and then got out again for the next 45 minutes. Anything longer than that would have been super dangerous. It already was pretty dangerous though.
Petra was just wearing a ripped top, ripped trousers and super worn down shoes. So we didn’t have much freedom and time to work things out. We had never seen the location before, we had never filmed under such circumstances and we had to adapt quickly and make the most out of it without freezing to death.
The camera was wrapped up in a special plastic camera bag and we had to put a huge scarf over the camera and camerawoman in order to be able see the image because of the brightness of the snow. Looking back, we still don’t know how it worked out so well, but luckily it did.

In contrast to that we also filmed some scenes during vacation which was pretty comfortable in comparison. We filmed in Spain (Lara drowning scene) and in South Korea (Sam’s nightmare/vision and pretty much every scene/location that looks Asian). The scenes we filmed in South Korea were created and thought of spontaneously after visiting those beautiful locations. We were like „we have to film something here!“. So we did.

We loved filming outdoors in this variety of beautiful locations! It was always a new challenge and we’d always have to adapt to the new circumstances but this made filming just all the more thrilling. 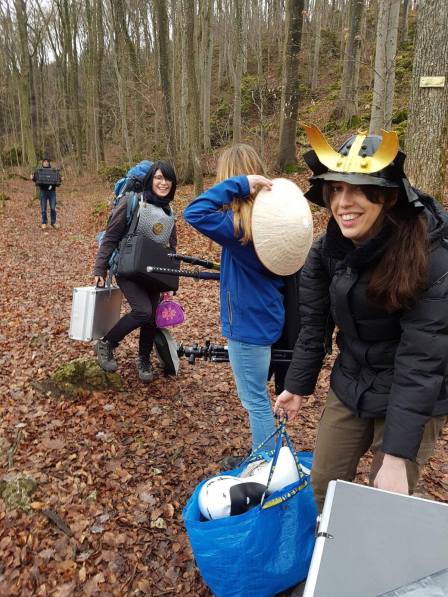 4) Who made the costumes and props? Can you tell us a little about the process?

Many different people were involved in making the costumes.
Lara and Sam along with Mathias Ritual Version were made by ourselves. Mathias “normal version” and the Solarii were also made by us two, together with the actors – Solarii mainly worked like: “take some old clothes and make them look older than before”.

We also spend some time just hammering and taping self-made doors into caves along with our crew or finding the right dirt to use and mix it with fake blood to create the ultimate Lara Croft make up that Nora would delicately spread over Petra. One time our Mathias (Florian Huber) had to carry a huge log up the mountain to put it up in a cave for the fire ritual scene. The actors of Roth and Vlad made their costumes by themselves. And our beloved friend Tinkertale Cosplay did an amazing job on creating Himiko and Sam’s ritual version.

5) How many people were involved in your film and how much time took it from evolving the idea to finally publishing the film on YouTube?

All in all over the four years there were about 50 people involved.
Some of them were there from the beginning to the end, some moved cities and couldn’t help until the end and some we met during the more finale period of filming.
But in reality on most of our filming days we’d be 2-5 people. 1-2 actors, 1 person as camera, 1 person as boomer and sound, sometimes 1 person (or tripod) for light.
On some special filming days we’d be about 10 people, but that was rare, like about 3 times Postproduction was mainly done by Petra Pausch and Max Wolter and it took about 800 hours, but we can’t say for sure. 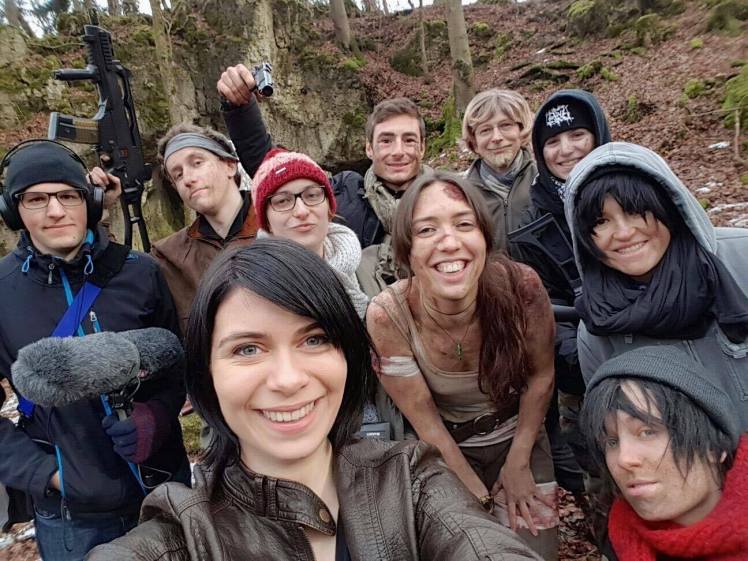 We started in April 2013 and wrapped up filming in Februar 2017 and we had a lot of different script changes during this whole time.
At first Petra had written a script for a 10 minute film project focusing on Sam instead of Lara. But Nora insisted on more Lara scenes and so we started filming lots of scenes that were not in the script. As a result we just randomly filmed more and more scenes from the game without a fixed and matching new script.
Beginning 2015 we rewrote the script and turned it into something way to big to be realized by students. We had all the characters (Alex, Jonah, Reyes etc.) and epic battles with lots and lots of enemies in our mind. But it turned out to be too big to be realized by such a small group of people. Sadly we also lost some of our footage from that time.
In 2016 we rewrote the script again, making it more realistic for students to realize. We tried to incorporate the older scenes from the older scripts we’d already filmed.

As we both lived in different parts of Germany and constantly had lots of uni work and other stuff to do we couldn’t film continuously for long periods at a time. Especially 2016 was a really stressful and busy year so we didn’t have the chance to film anything.
So all in all the project took 4 years to complete but we actively worked for 3 years on this movie. Without our awesome team of friends and family this film wouldn’t have been possible. Thank you so much!

6) Has there been a special acting or physical training for everyone involved?

Actually .. no. Not at all. We just did everything on the go. The action sequences also were created on set. Some scenes just kinda happened.
We never (except for the camp fire scene) rehearsed our scenes beforehand. So when we arrived at the location, everything was done spontaneously and we’d change things up along the way.
We’d always have a vision in mind but location, weather, number of helping friends and many other factors did influence a lot of changes. We had to be flexible and spontaneous.
We never really had preparation time.
Usually all preparations are done before starting filming but we were constantly in the middle of filming and preparing and changing and fixing.
For our next projects we definitely want to do training beforehand though! We really want to focus more on the preparation, acting and stunt training and on everything!

7) The film’s main language is German. Will you add English subtitles?

We’ve already added English subtitles. Our good friend Tinkertale Cosplay helped us so much by translating our script while we were busy editing. We’re actually working on French subtitles ~ so stay tuned.

8) Are you planning on making a sequel or prequel?

Actually it is very likley… we do want to continue the story of Lara and Sam after Yamatai. So maybe, when we´ve had some rest, the story will be continued.

9) Gamescom is just around the corner. Are you planning on attending this year? If so, where can people meet you?

We’re heartbroken that we can’t attend GamesCom. We both are currently in South Korea for a semester abroad. We would have loved to meet up and chat. We really want to thank all the people who watched and supported our film. Hopefully we can meet up at other conventions.
We wish everyone attending GamesCom lots and lots of fun ~
GamesCom holds a special place in our hearts since this is where we got introduced to the tomb raider community and got to meet Meagan Marie, Brian Horton and Mike Brinker and so many awesome new friends. So it is kinda where everything started getting more intense. (We´ll definitely be attending next year!)

10) Is there anything else you would like the Tomb Raider fans to know?

We want all the Tomb Raider fans to know that we are constantly inspired and overwhelmed by your love and passion for the franchise. We are so thankful for everyone we got to meet -there are so many dedicated, talented, creative, lovely, funny and beautiful people in this community. And we’d love to meet as many of you as possible ~

With all the background information you have just gathered, you are well prepared to watch the film on YouTube below now! Enjoy it, make sure to follow PP Production on Facebook to not miss out on a sequel, and show this incredible team, especially Nora and Petra, some support!